I was born in 1981. It was the time of President Reagan, before the Challenger explosion. Video had killed the Radio star a few years before. “Don’t You Want Me” by The Human League was top of the charts. We were still in the Cold War. The Berlin wall had been up for twenty years and it would be another 8 before it came down. A McDonald’s cheeseburger was something like sixty cents. I didn’t really care or remember because I was busy doing baby stuff. My earliest memories was of being an infant in one of those inflatable pools, and as a toddler falling into my giant pink pig toy box and getting stuck on my back inside. I really liked Mr. Men and Little Miss.

My mom put me in beauty pageants and ballet and tap dance classes at an early age. Pageants before I could walk, dance by the time I was four or five. I remember enjoying dressing up and performing. But I really wasn’t into it for the competition aspect. I remember having this long pastel blue tulle dress covered with glitter and long gloves. I was going down the runway but staring at where my feet should be. I wasn’t looking at the people with confidence, but at how my dress sparkled. There’s a VHS somewhere of judges interviewing me and I’m making dinosaurs with my hands. Later, all the girls are getting their shiny trophies and my eyes turn to dinner plates as each one passes. When I finally get my participation trophy, I’m happy as can be. I immediately took it home and dismantled it to see how it was put together. It was in pieces after that. The pageants stopped sometime after that. I was in dance until I was about eight.

I was the only child between my mother and father, but they had children from previous marriages. My mom had two sons and a daughter. My dad had two daughters. By the time I was born, the youngest was eleven years older than me, the oldest seventeen and already had a child. I was essentially born an aunt. It was pretty strange telling other kids in school that my nephew was in fact a nephew even if he was in first grade and I was in kindergarten.

My dad was in the navy and early on, we moved around a lot. I spent most of the time I can remember clearly around Virginia Beach. We moved to Ohio when I was seven and I’ve lived in the general vicinity since then. We did move around the same city pretty frequently, which meant several different elementary schools, two middle schools and I stayed at the same high school.

I was always in my head, drawing, writing, and creating stories. I never really fit in and I was bullied a lot throughout most of school. I didn’t really start trying to fit in until high school. It was a strange time where one tried to deny their true selves in order to make life easier. I stopped drawing my favorite cartoon and game characters. I drew pretty girls and fashion. I read fashion magazines, I tried to be trendy. I was involved with a lot of clubs and organizations in high school. I played trumpet in marching band, and was voted worst marcher each year. To be honest, I think it became a running joke after the 2nd year. I joined drama club and entered the Thespian society by my junior year. I didn’t have a lot of acting roles, just small roles. I directed a one-act play, which I still have the script for. Mostly, I worked on set, costumes and makeup. I was involved in Teen Institute which was a leadership program. I had some great memories from that and many friends have remained connected long after high school. I was also in an Eco club, I joined committees for school dances and events.

High school was also the time where I began creating websites. I wouldn’t say that I was really designing them at this point, but I was leaving tiny fingerprints on the internet in those days. Namely, those prints were in the form of Britney Spears and N’sync midis, Comic sans, rainbow backgrounds and animated gifs. I did make pages for a few clubs, on gurlpages. Why not geocities? Because gurlpages UI was pink and purple, that’s why. Obnoxious teenage girl logic, Duh!

When I entered college, I was really starting to make sites seriously. I spent a lot of time on my first personal site, Bobbi’s World. I eventually bought my first domain, sweet-essence.net and four months later this domain. I studied fine art in college, with a desire to go into illustration. I took a lot of foundation art classes, writing classes, some sculpture classes and digital art. I was already dabbling in digital art in high school and making my first illustrations before then. I also learned photoshop a bit in school but by the time I was taking more webdesign classes, I was already overly familiar with it from making my own sites. I attended a community college with the intent to get my foundation classes before transferring to an art school in the state.

My home life was hard, and I was in a relationship that, looking back, was actually abusive. I ended up in a deep state of depression and used my online life as a way to escape. By 2003, I’d quit school and was working as a cashier in a grocery store. Most of those following years were a blur. I spent my free time online and making cosplays and attending conventions. I was attempting to escape by withdrawing. I did take online classes with the desire to complete my degree, I couldn’t leave home. The economy crashed in 2008 and I was unsure if I’d ever get a career in the arts. I was also struggling with math, not having used it as much on a daily basis. I figured it was better to quit while I was still ahead instead of being loaded with more student loan debt.

I began staffing conventions and that was how I met my husband. Desperate to get out of my situation, I moved in with him only a few months after we started dating. I haven’t looked back. I began working at discount retailer as a cashier. We were married in 2011 shortly after I was promoted into management. Most of the 2010’s was spent working there and staffing anime conventions. I started wearing j-fashion. I began taking up Artist Alley at conventions for extra spending money. In 2016, I was offered a store manager position and I took it. The pay was better, but the hours were awful. Two years later, I decided to quit and try to pursue my dreams of being an artist and illustrator.

So here we are. I’m not sure what the next chapter in my life holds, but I have a feeling that it’s going to be a great one! 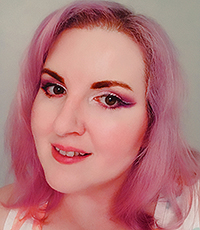